We use cookies to help make our website better. We'll assume you're OK with this if you continue. You can change your Cookie Settings any time.

This simply means - is there a perfect Debt to Equity ratio?

Well there are 3 theories here we go..

suggests that using some debt will lower the WACC, but if gearing rises above an acceptable level then the cost of equity will rise dramatically causing the WACC to rise. 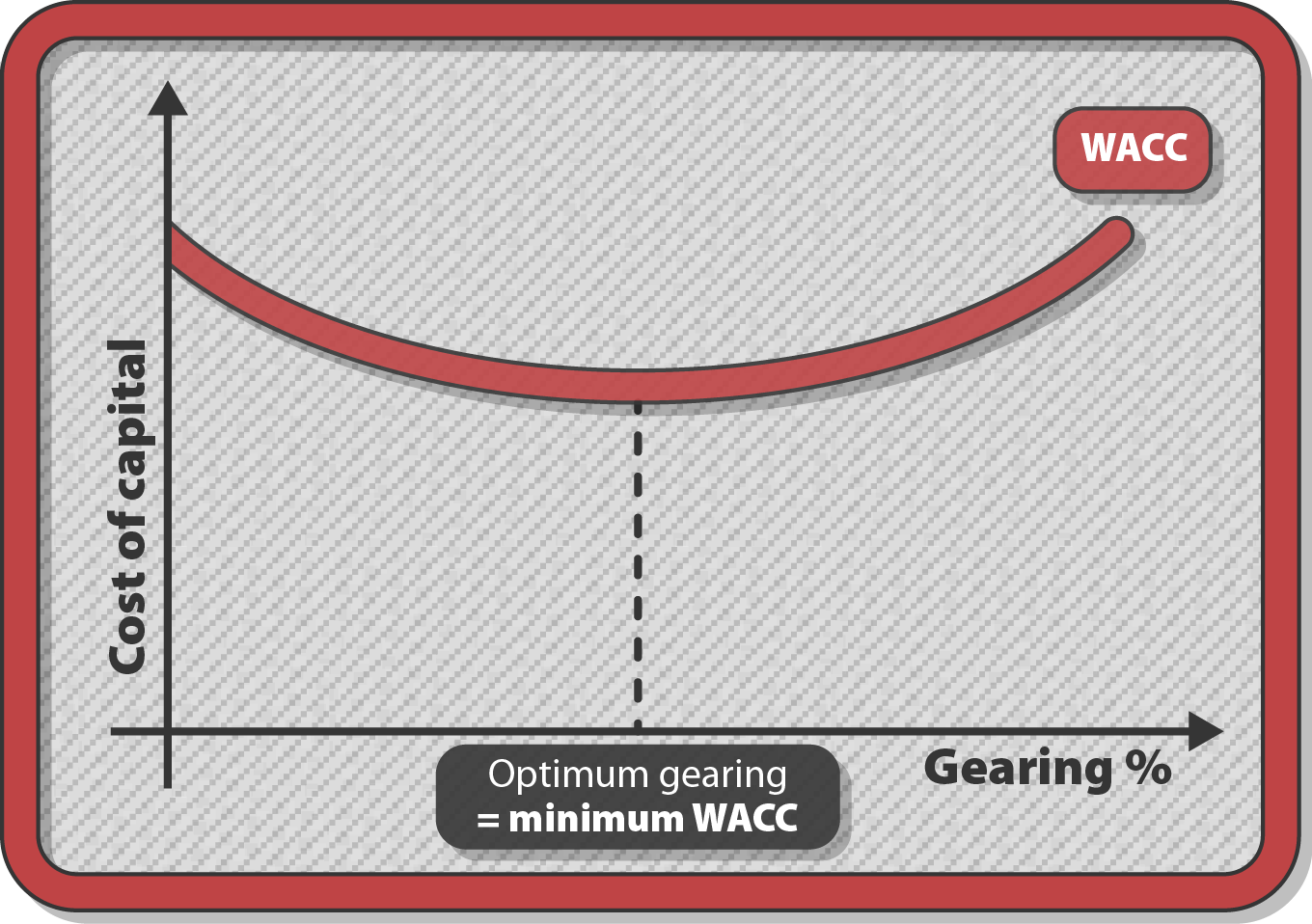 The cheap cost of debt (as it is ranked before equity in terms of distribution of earnings and on liquidation), combined with its tax advantage, will cause the WACC to fall as borrowing increases.

However, as gearing increases past a certain point, shareholders increase their required return (i.e., the cost of equity rises).

This is because there is much more interest to be paid before they get their dividends.

At high gearing the cost of debt also rises because the chance of the company defaulting on the debt is higher (i.e., bankruptcy risk).

So at higher gearing, the WACC will increase.

In the traditional view of capital structure, ordinary shareholders are relatively indifferent to the addition of small amounts of debt in terms of increasing financial risk and so the WACC falls as a company gears up.

As gearing up continues, the cost of equity increases to include a financial risk premium and the WACC reaches a minimum value.

Although it is more or less realistic, the traditional view remains a purely descriptive theory.

This view can be represented by a U shaped graph, where the vertical axis is the WACC and the horizontal the amount of debt finance.

Next, Modigliani and Miller (MM)

In order to demonstrate a workable theory, MMs 1958 paper made a number of simplifying assumptions:

The capital market is perfect;

There are therefore no transactions costs and the borrowing rate is the same as the lending rate and equal to the so-called risk free rate of borrowing;

Risk is measured entirely by volatility of cash flows.

If debt also saves corporation tax then it does reduce finance costs, which benefits shareholders ie it reduces the WACC.

This suggests that a company should use as much debt finance as it can. 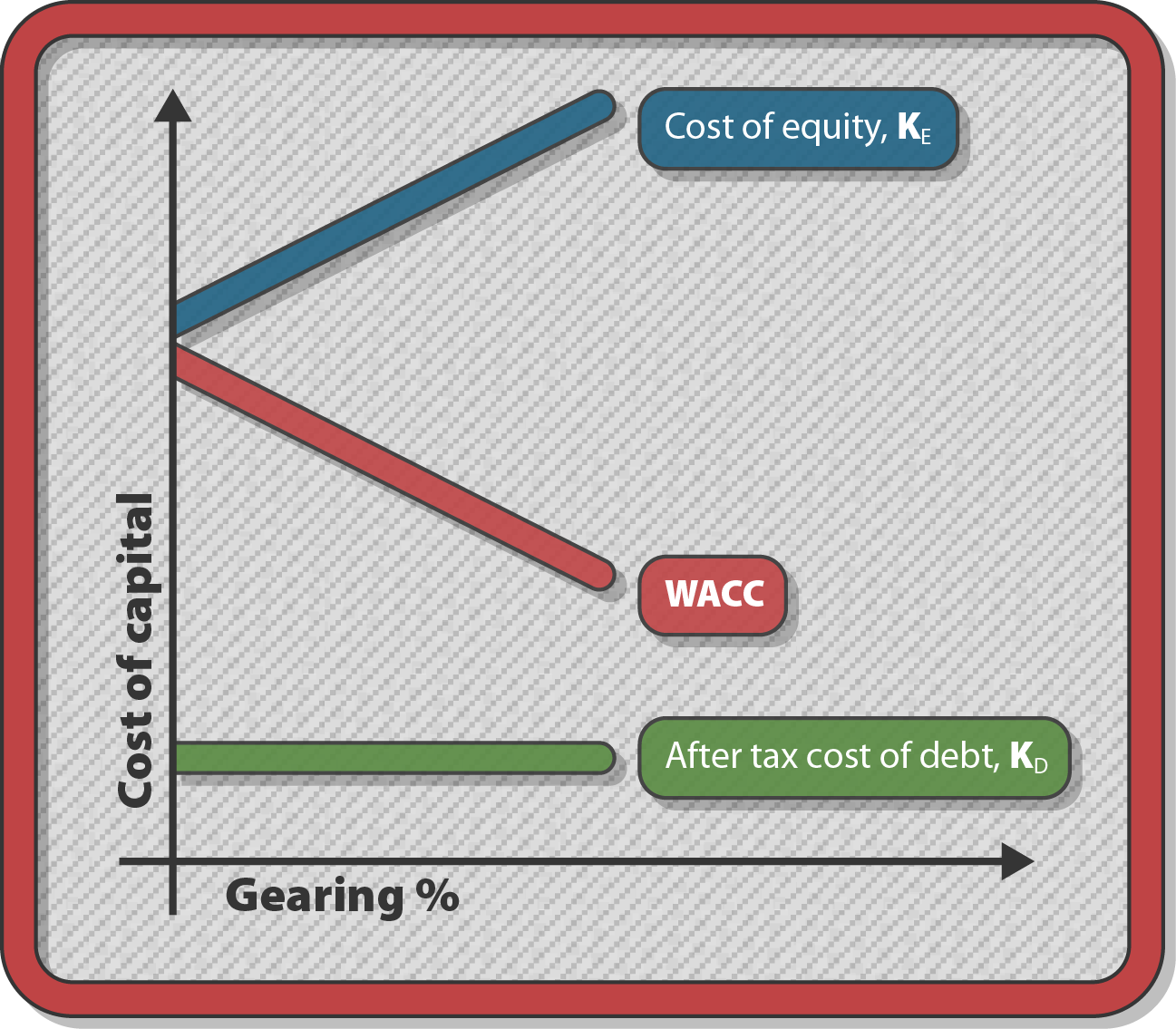 This simply suggests that firms do not look for an optimum capital structure rather they raise funds as follows:

This is because internally generated funds have no issue costs and needs no time and effort in persuading others.

Debt is better accepted by the markets than looking for cash via a share issue which can seem desperate. Issue costs moderate.

Debt finance may also be preferred when a company has not yet reached its optimal capital structure and it is mainly financed by equity, which is expensive compared to debt.

Issuing debt here will lead to a reduction in the WACC and hence an increase in the market value of the company.

One reason why debt is cheaper than equity is that debt is higher in the creditor hierarchy than equity, since ordinary shareholders are paid out last in the event of liquidation.

Debt is even cheaper if it is secured on assets of the company.

The cost of debt is reduced even further by the tax efficiency of debt, since interest payments are an allowable deduction in arriving at taxable profit.

Debt finance may be preferred where the maturity of the debt can be matched to the expected life of the investment project.

Equity finance is permanent finance and so may be preferred for investment projects with long lives.

This audio is hosted on a service that uses preferencestracking cookies.